Twas the night before Christmas, when all through the house
all the nerds they were stirring, they were rolling their dice…

The Holiday Period is a time of togetherness and what greater way to spend that time than around the gaming table? So here are our top picks for great games to play with your loved ones! 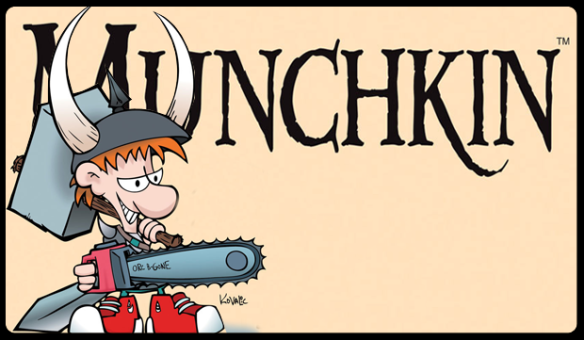 Sometimes you don’t want in depth character roleplaying or a rich back story. Sometimes you just want a giant Broad sword, to kick down the dungeon door, kill the monster, betray your friends and get the treasure. If that’s the case then Munchkin is the game for you! A card based game where you take out all the complex and heavy aspects of Dungeons and Dragons, leaving in the fun of the fight, the treasure and wonderful mechanics to encourage backstabbing. With hilariously designed cards and an open invitation to add your own cards (like those designed by the nerd eyes only team below) Munchkin, including its many expansions, is a fast paced furious game of hilarity and monsters!

A card based game like our previous selection but with an entirely different flavour. Gloom, with it’s beautiful art style and brilliant layering mechanic on transparent cards, is a game where misery really does love company and the winner is the first one to murder their family. Gloom is a game where you tell the tragic story of a number of bizarre and Gothic families. Place your story cue cards upon the characters to ensure your family’s miserable death and to save the other families from theirs. This is definitely a game improved by a vivid imagination and a flare for storytelling, the key is to invest and enjoy!

Obviously Monopoly is a classic Christmas time sink and occasional family feud impetus. But now with the huge numbers of nerdy variables; one can breathe life into the old game and enjoy a horde of new features and board tiles. Each new version allows for a world of new play in Azeroth, Middle Earth, The Land of OOO, a galaxy far far away, or in a big ball of timey wimey stuff.

It’s the Zombie Apocalypse and you, a newly minted member of the undead horde must with your pals search out some juicy juicy Braiiiiiiins….However, this new world of the undead is not without its trials and tribulations. Shotgun toting survivors and those too fast to catch, plague your shambling moments and you must eat 13 Brains to survive this day. A ridiculously simple game that does not belittle the joy that can be found by playing it. Zombie dice is at its core, just a cup of dice. However it is also a game of great versatility and accessibility for any number of players. The dice represent survivors of the zombie apocalypse with three possible outcomes; a Juicy Brain for the player, an escaped victim and an empty belly or a shot gun blast to the face! Each player takes turn to roll dice until one player wins by collecting 13 brains. One can save the brains you get or continue to roll until you either win or receive three shotgun blasts, at which point you lose any brains you’ve collected and have to start again on your next turn. Quick and easy to set up and play, this is probably the best game on our list to start any gaming session.

Another game whose simplicity hides a huge amount of fun, is Cards Against Humanity, a deck of cards used essentially to play a fill in the blank game with a twist. Now to make this very clear, this a game that can be wholly unsuitable for children depending on those playing and the cards you choose to use. At its heart it as a game meant for adults. Now that the disclaimers are out of the way, we can get on to the good stuff! With an incredible variety of card options, the game works to create the funniest, most disturbing and truly horrific sentences known to man. Helped along by the option to add in your own cards and a army of expansions this game will raise eyebrows and bring you to fits of laughter.

This selection is an odd one to explain, especially as the end of the game, and pretty much the purpose, is to end in a calamity or “fiasco” for the players. A roleplaying game based around a series of story twists dictated by the game mechanics and the choices of the players. It is a game where all the players start out with hopes and dreams and live to see them trashed by the end of the game!

Elder Sign is a cooperative card and dice game, based on the world of horror writer H.P. Lovecraft. Players randomly select their own monster (known as an Ancient One) to fight against. The aim of the game is to get elder sign tokens to “seal” or imprison it and avoid doom tokens which will awaken it to our world. Each player chooses an investigator to play as, each with unique abilities. Players take turns exploring a randomly generated room. If a player succeeds at completing all of the tasks in the room they are exploring, they obtain a reward, if they fail they receive a penalty. Rooms are explored until either the Ancient One is “sealed” or “awakened”. If the Ancient one is awakened, the investigators must fight it to defend the world, optimistically with next to no chance of success. Its is a game of anticipation and fear that embodies the feel of the literature it mimics perfectly!

Betrayal at House on the Hill

Betrayal at House on the Hill is a horror game where tiles are laid by the players to procedurally generate a new house to explore with every game. Characters enter the house and search the rooms for dangers, traps, items and omens until someone triggers the haunt (any of a number of scenarios outlined in the written material). At this point one of the players number (also unknown to said player until this point) is revealed as a traitor, with his own evil goals contrary to that of the other players. He or she must then seek to complete said goals with a host of new abilities and helpers. The rest of the team seek to stop them. It is a game with huge “replayability” and a wonderful way of bringing people together, especially against the new enemy in their midst!

Buy here – Betrayal at House on the Hill

Happy holidays everyone, hope you have as much enjoyment with these games as we did. Any alternate game suggestions are most welcome, so feel free to leave them in our comments section below!